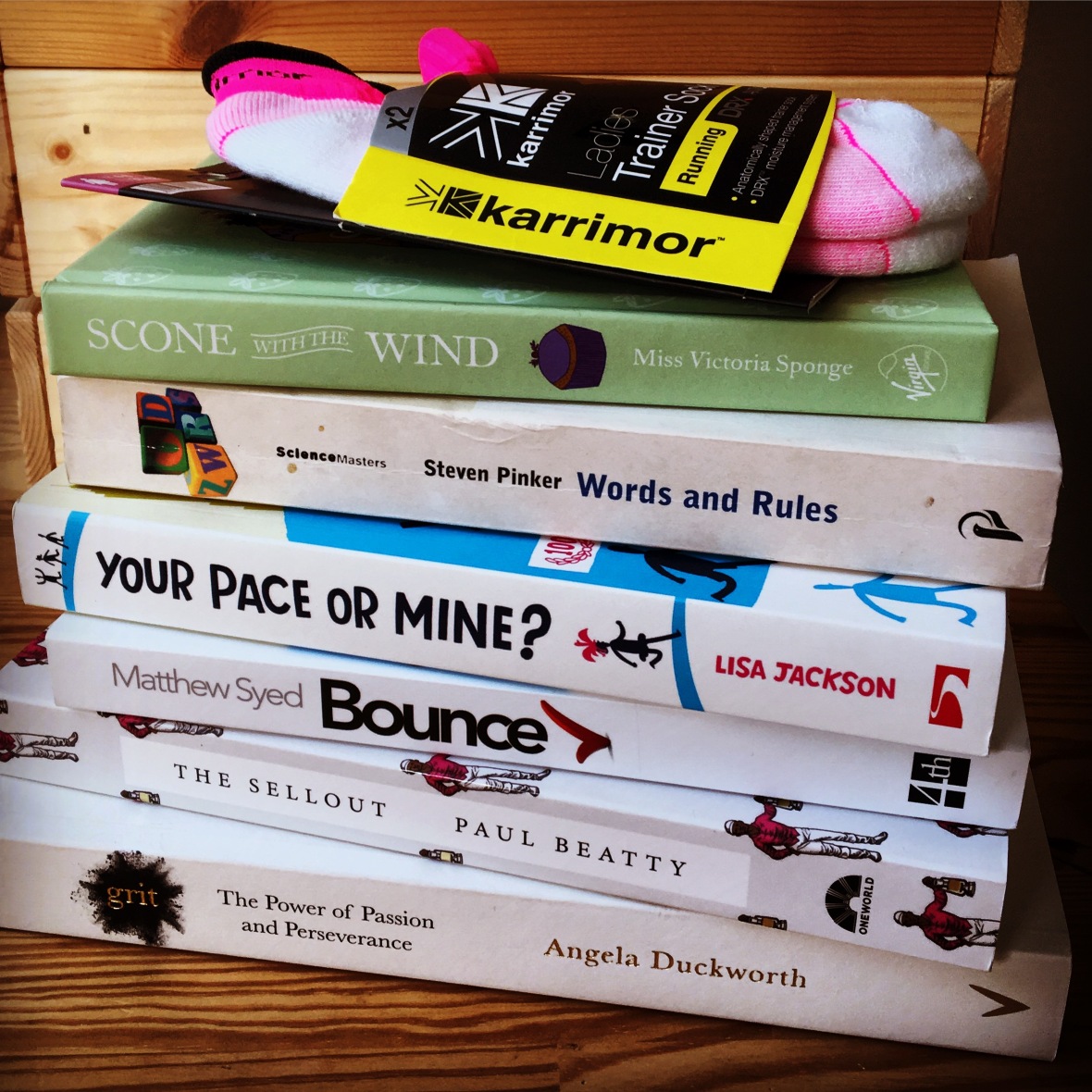 It was my birthday this week, and I received – amongst some other lovely things – a whole stack of books. In fact, if you glanced at the pile of gifts from generous family and friends, you’d probably end up with a pretty clear snapshot of much of what I love in life: books, running, wine, fresh flowers and tea leaves, and most importantly cards from many amazing people, with whom I’m blessed to share it all. (And chocolate. Obviously.)

As it was a significant number this time, I celebrated my birthday a little more vigorously than usual: a (surprise!) trip to London to see my favourite comedian, some dinners with friends, shopping and lunch with my husband, and: a run in my local park. When Tom asked me what I would really, really, really like to do to celebrate turning 40, I only had one answer.

This last Sunday I invited everyone I could think of to join me at 2pm at the park near my house. The main park circuit is exactly a mile, so I figured we could go round at varying speeds as many times as we liked. Then anyone who wanted more could run the extra mile back home with me, and that way it would be anywhere from a mile to 5k at a comfortable pace. Perfect, right?

I honestly thought everyone would be as excited as me. Tom gently braced me for the possibility that perhaps we wouldn’t be overrun by participants, as it were. I wondered if we should contact the park to warn them of the hordes. Tom thought that probably wouldn’t be necessary.

Amongst my friends there are many who enjoy running (at all kinds of levels from occasional mile in the sunshine, right up to ultra double hard lunatics). But to cut a long story very slightly shorter, when chatting to a variety of them as we approached the day, I began to realise that mostly, runners or not… nobody much fancied it.

So that is of course, just fine. And perhaps you are less surprised by that relevation than I was! We all have our preferences. Just as in book choice, or whether you’re a tea or coffee person, dog or cat lover, we’re all different. But I wondered what it was that made me thrill to the possibility, whilst most of my mates shuddered.

By way of balance, I recently read a novel in which one of the minor characters is an obsessive runner: a carb-loading bore who frequently ditches on dates because he’d rather knock out a 10k, and prefers comparing calves with his mates than sharing his life with his girlfriend, quietly judging every non-runner based on their caloric intake and puny muscle tone.*

As you may guess, I didn’t love the representation of the runner. I guess I worried that I’m another running bore. But I don’t relate to the combination of smug superiority and supreme dullness of that stereotype – there are no two friends of mine who approach running in the same way, and certainly none of us judge ‘non-runners’ (which I don’t believe exist anyway, they’re just people who aren’t currently wearing the right shoes…).

There are many days I don’t feel like going for a run. Sometimes I have to play extreme Jedi mind tricks on myself to get out of the door (you can check out some of my craftier strategies for staying keen in previous posts if you want to know how to use the Force for good). But really: the thought of it always thrills me. I can run! I can put one foot in front of the other and move, push my body up hills and around corners – sometimes gliding, more often a little more of a shambling lollop…but I can run. And it’s completely glorious, and I honestly believe you can’t beat it.

This is the home straight of my birthday run – my pals haven’t deserted me, they’re just out of shot. Honestly.

So a few friends made the birthday run and we had a great time, going at a wide range of pace and over a varied distance. And brilliantly, loads more joined us afterwards for hot chocolate and cake, which was awesome. I had a truly fantastic day.

Discovering running has been a significant part of my journey over the last few years, and I really wanted to celebrate that as part of marking turning 40. And I love, value and appreciate all of my dear friends who’ve made the journey with me, who have shown massive strength, maturity, grace and determination in their own lives, and been a huge source of encouragement across many areas of life. It doesn’t matter one bit whether they run themselves or not, or whether they ran on Sunday.

I guess what I’m interested in here is whether people would have enjoyed it if they had come running. I think they would.

I’ve found that my body has responded to running at an astonishing rate; that it’s a hidden secret delight which almost anyone can access; that many, many people run often, just quietly, without making a fuss**. No gels vs chews discussion. No super expensive clothing or complicated race schedule. They just hit the pavement, and feel the adrenaline lift.

So. I have some brilliant books to work through over the winter, and I thought I might briefly review them here, every now and again. You won’t necessarily agree with my choices or opinions though, because we’re all different – but I’m pretty sure we’ll share some common ground. You may not even fancy reading that much – but you never know what you may end up loving, unless you give it a try…

(*I didn’t like this book. I thought it was lightweight, superficial and silly. Clearly many people think it’s great: it’s done extremely well, an international bestseller, and has been made into a successful Hollywood film. So there you are. We’re all different.)

One thought on “The Secret Delight of Running”