Conditions were not exactly perfect.

It was the day of the Shakespeare Autumn Half.

The night before I dreamed I got off the bus without my shoes on. Not exactly difficult to read my pre-race anxieties there! So: first obstacle overcome.

To say I’d been anticipating this race for a while would be an understatement. Ever since my disastrous and abortive training for the Great Birmingham Run in 2015, I’d imagined that a half marathon distance was beyond my capacity, and it hung around my neck as a sign of my limitations. The injury I scored in my mismanaged over-training that year had put me out of running for months, and until last December I’d laboured under the fear that at any time I might be just one run away from over-use, benching myself again.

Since starting to run daily, that fear subsided, as I quickly realised that my body was capable of far more. As the year progressed, so did my confidence, and so I began to look for a suitable race…

If possible I avoid Sunday races, as I never know if I’ll be able to make them, so Saturdays are a much safer bet, but harder to find. Also, I had a sentimental whim to run a Shakespeare race, having lived near Stratford for 20+ years, studying literature and theatre at Warwick University. Since discovering my passion for running, equal only to my love of reading and writing, it seemed like a neat union of the two. Yes: cheesy. But here we are. This event appeared to be ideal.

Along one of my regular routes

However, as the training developed, I’d started to slightly regret my choice for my first Half. My long runs in particular have been absolutely joyous, and I’ve relished exploring the increasing mileage around my neighbourhood. There’s lots of lush green spaces, trail and road, to stretch out your legs, with a nice variety of flats and inclines. In contrast, the Raceways event is run in laps on a disused airfield, and when I contemplated the thought of pounding out 13.1 miles on the same 5k of tarmac, completely flat (one reason why it’s very popular with some runners) and repetitive, surrounded by nothing but low hills—well, I couldn’t work up a lot of enthusiasm.

I haven’t competed in many races, but after my first 10k I’d never got stressed by them. I guess the distances always felt manageable, and often the point of the race was to partner other runners, rather than get a PB, so it’s always been about having a good time and enjoying the event.

Saturday felt different. Right up to the day before, I felt fine, but Friday night, I was a ball of jitter. Too many variables, maybe fighting off a bug (turns out I was—the children and I have been really poorly all this week), and just plain nervous that I’d mess it up somehow.

I’d followed a good, if basic training plan, and I was totally confident that I could run the distance. But what I hadn’t factored in was the race-ness of it all. When you do a long run, it really is all up to you. You can start when you want to, and you can pause if necessary. When running 10+ miles I will usually route myself past a public loo, or if I’m out on a trail, find a convenient bush. If my shoelace comes untied, or I get a cramp in my toe, I’ll pause my timing to sort it out. And if I’m plain not feeling it, I might postpone the long run altogether, and settle for a few miles round the block, and try again tomorrow.

I forgot that you can’t do that when you have a race.

You have to set off when they fire the gun. You have to have a wee before you start. If your shoelace comes untied, the amount of time it takes you to tie it up again goes on the clock.

None of that really matters, of course—you run the best race you can on the day—but I’d just sort of forgotten about the added pressure that comes when it means more than just a bit of fun.

This time, I really wanted to do my best.

And actually, I did. 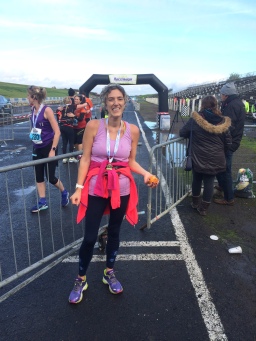 …can barely stand up

It turns out that a repetitive lap course, even if it’s a really boring unattractive one, is quite comforting, because you quickly become familiar with it, and it can help you to pace yourself steadily. (I think that I’d find it psychologically draining to run a full marathon on it though, as more than four laps might send me bonkers.) Also, a massive bonus is that your supporters can really cheer you on. The weather was rotten, and as I had my husband’s mum staying with us, it didn’t feel fair to ask them to hang around. So they dropped me off at 9, and enjoyed the delights of Stratford shopping and coffee for a couple of hours before coming back to cheer me at the finish. Some other lovely friends also turned up at the end too, with comedy signs and moral support, and it was a fab feeling, having them run along with me for the final quarter mile.

As always if running solo, I listened to podcasts for most of the race. I know this may seem a bit eccentric, but I just need my mind to be fully occupied if I’m running for more than half an hour or so. (Plus, I can’t bear the heavy breathing of us all!) For the final three miles I ran in silence, and I guess that’s where my real race began.

After a fairly carefully paced start, although slightly too fast (I’m still not very good at going slower than I want to), I started to feel pretty done in about halfway round, and between Miles 7 and 11 I just got gradually slower and slower, eventually about 20 seconds over my planned pace.

That was when I realised I didn’t want to coast in comfortably, safe in the knowledge that I could do a few more miles if necessary. I’d trained hard, I’d stuck with my programme and I hadn’t missed a single run. I didn’t want to leave anything on that course.

The moment I crossed the finish line my hips seized up and I staggered through the funnel, but I was delighted. Finishing at a sprint was an amazing feeling, and I knew I’d run a good race.

If I’d turned off the podcasts earlier, could I have focused more and made it under two hours? Maybe… but probably not. Shaving off three minutes is actually pretty tough, so I think I’m just going to take that as a satisfying time!

All of my lovely lot were there to get those weary bones back to the car and home for an enormous plate of chips, mushy peas and a mushroom pie. (With Prosecco, because I’m classy.) Tom proved yet again that he is both a heroic and wise partner-of-a-runner, spending his time in the Stratford shops superbly, and presenting me with some incredible bath soak, more welcome than any medal.

This got much appreciation from other runners! 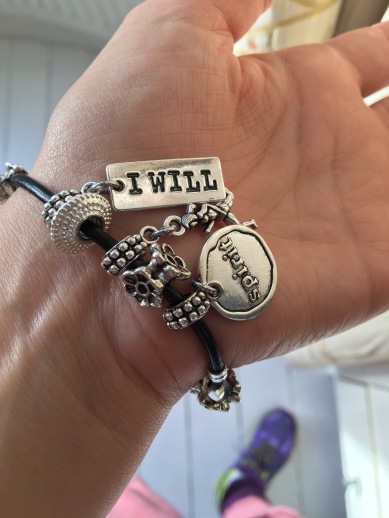 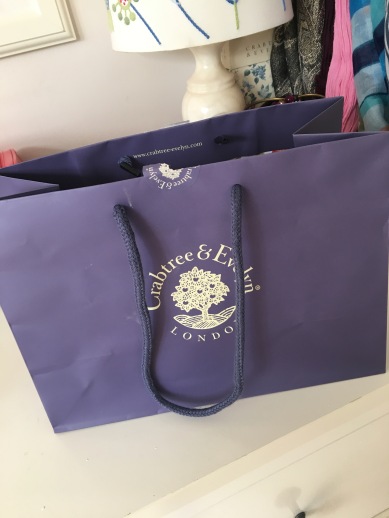 This race in a nutshell:

Stuff to learn from: 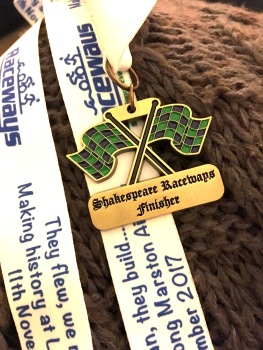 It already feels like ages ago now, and although I’ve been ill this week and struggling to fit in any decent length runs, I’m yearning to get back to a training plan. After asking the @UKRunChat crowd for advice, I think I’ll keep things light for another week, and then start to look around for a race in the Spring to work towards.

So it wasn’t perfect, and I can see various things I can learn from for the future—and not just in race-terms. (Don’t sweat it. Enjoy the training. Give it your best. Appreciate your loved ones.)

And I’ve done it, and it was great. Next?